skip to main | skip to sidebar

The final day of the workshop and the last posting 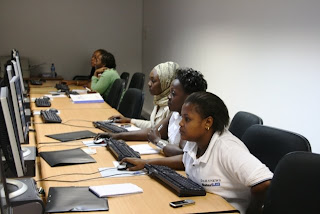 Sory Maggid i Hope this is not plagiarism can i borrow the picture?

UNFORTUNATELY today is the last day of this wonderful Internet workshop for Tanzanian Journalist, but I am happy to say that I have learned a lot about internet especially how to open and operate blogs.

Through these sessions since Monday to Friday we had a wonderfully experience on different kind of issue regarding internet, just to name a few we managed to open some useful websites for our carrier as journalist.

But also we had amazingly experience on how to post text to our blogs and even how to post a picture and link them with the intended text.

Many of us did really good in posting the pictures into our blogs example Mary Lupamba I had to learn from her how to link the picture I had with my story.

And it was a very good experience and many of us managed to do it also very good and people can visit through my fellow participants’ blogs and see for themselves.

I would also like to thank our consultant Mr. Peik Johansson for being a wonderfully teacher and I hope he has tolerated some of us for being stubborn during the whole workshop.

Also I would like to thank Mr Maggid Mjengwa for helping us to learn more about blogging, giving us his experience as a famous blogger in Tanzania and I promise him that I will try to follow his step by keeping my blog active even after the workshop.

Chinese people demostrating against human right problems in their country. photo by amnesty International.
Posted by Halima at 1:21 PM No comments:

According to Amnesty International, the major human rights problems in China before the Olympic Games were abuses, arbitrary detention, torture and ill-treatment of prisoners, severe restrictions on freedom of expression and death penalty.

One of the examples of the concrete individual cases about human rights in China is about Shuang Shuying who is a 76-year old evictions petitioner, religious rights activist, and outspoken opponent of the Reeducation-Through-Labor (RTL) system.

According to Amnesty International Shuang saw her Beijing home demolished in 2002 to make way for Olympics redevelopment. After the demolition, her family had to relocate eight times.

She has been imprisoned since February 2007 on trumped-up charges after appealing for her son's release. When she began her prison term, Shuang was suffering from high blood pressure, diabetes, and a heart condition. The authorities have denied her family's request for medical parole, and her health continues to deteriorate

Apart from her, other example of individual problem of human right in China is Shi Tao who was a freelance writer, journalist, and head of the news division at the daily Dangdai Shangbao (Contemporary Business News) in Changsha, Hunan Province.

He had also written numerous essays for overseas Internet forums, including one entitled "The Most Disgusting Day," in which he criticized the Chinese government for the March 28 detention of Ding Zilin, a Tiananmen Mothers activist whose son was killed during the 1989 democracy movement.

On April 20, 2004, Shi attended a Dangdai Shangbao staff meeting in which the contents of a Communist Party of China (CPC) Central Propaganda Bureau document about security concerns and preparation for the upcoming 15th anniversary of the June 4th crackdown were discussed.

That evening, Shi used his personal Yahoo! e-mail account to send his notes about this meeting to the New York-based website, Democracy Forum. He was ultimately detained for this action on November 24, 2004. On April 27, 2005, Shi was tried for "illegally providing state secrets overseas" under Article 111 of the Criminal Law. Because the document was certified a "top secret" state secret, he was sentenced to ten years' imprisonment following a brief trial conducted entirely behind closed doors.

And the other individual concrete example is Mao She has been an activist and petitioner for 20 years. She was dismissed from her soap factory job in 1988 when she refused to abort a second pregnancy, and since that time has petitioned the government for redress on that dismissal and subsequent abuses, including forcible eviction.

As a result of petitioning, she has been forcibly admitted to a psychiatric hospital three times, detained multiple times, and served a one-and-a-half year sentence of Reeducation-Through-Labor (RTL).

In the first half of 2006, Mao was twice detained and placed under "residential surveillance." During her detention, she broke two table lamps and other objects, damage for which she is now serving prison time. Mao has been subject to a range of humiliating abuses in prison.

With these examples and many others the Amnesty International hopes that with Beijing hosting this year’s Olympic Games the event can create a positive human rights legacy for China. And the Chinese authorities pledged that human rights would improve through the hosting of the Games.

So according to these human right problems in China, Amnesty International has call upon China to cease the arbitrary detention, intimidation or harassment of human rights activists and other human rights problems I have mentioned above.

While the number of executions in China is dropping, the country remains the world leader in the use of the death penalty still..

ends
Posted by Halima at 4:12 PM No comments:

Internet as a tool of finding information

Here I am again on the third day of Internet Workshop for Tanzania Journalism and I continue to learn more and more on how to use internet not only in my career as a journalist but also in my daily life.

Today I have learned a lot on how to find information for my journalistic stories or features and what kind of information I can search by using website engines through internet.

As is known that we journalist doesn’t know everything we write so sometimes we have to use some help from expertise and it is not easy to find them, so if we use internet to find those facts it can help a lot, but that is if we know how to find the facts and also how to check them if their correct.

So through today session I learned on how to find certain information by using website engine Google and amazingly it was not that difficult as the exercise went on.

And what I found out is that sometimes it is not easy to find what you are looking for if you do not use the write word for the engine to search, so if you are not careful it’s easy to find wrong information or not to find at all what you were looking for.

However during the session we did a lot of things like finding some facts on some famous people, place and companies, e.g. we tried to look for the capital city of Burkina Faso, the name of president of Bolivia, contacts of Zain formally Celtel but also we even tried to locate the contact of president George Bush.

So through that exercise we had to visit several website like tanzania.go.tz, zain.com and White house website.ring that

Along with that we tried also to use Google to find some correct information to use if we had a tip on a certain story and how to use the engine to find the contact of a district commissioner and so on.

So it was a profitable day as other days and the fun side of it, is we have to publish the articles to our blogs.

Ends
Posted by Halima at 3:53 PM No comments:

Internet as a good source for a journalist

Yesterday in day two Internet workshop for Tanzania Journalist, I learned that apart from other sources a journalist can use, but also he/she can use internet as a good source too.

I knew that one of the sources that a journalist can use is his/her her ear and eye, people, contacts and press release but sometimes even if journalists have those sources also they can use internet to get their story more accurate.

And I found out why internet is a good source for a journalist because in there u can find a collection of newspapers and other information globally, you can check facts and even editing them, you can check grammar and you can even check background of something you are writing about.

We did a lot of things yesterday, apart from learning about the use of internet in everyday journalism we also opened each of us a blog account, it was amazing for me because I used to read and surf on other Tanzania and outside blogger and I didn’t even know how to open my own account.

Also yesterday we opened a lot of media websites that I knew exits and other I didn’t know that they exist.

Through what I have learnt yesterday I am sure now I have a good experience on how to use internet in my daily activities as a journalist. Because know I have a wide range of websites that I can use to get more fact, read and even just to have fun.

During yesterday session I did a lot of things like opening my own blog as I said before, opening other media websites inside and outside the country and I even tried to put a text and a picture in my own blog.

I had a little problem during the session, and it was just I couldn’t open some of the websites because I didn’t know the address correctly and also internet was slow.

Importance of using internet in journalism

Journalism is a job of informing the public about different kind of issues, they might be political, socially, sports or economical.

So as a journalist I need also to be more skilled on how to use internet so that I can read and get more information and pass it correctly to the public.

Internet service is a very good source for a journalist if he/she knows how to use it and that is if they know how to use which websites to get the right information they need.

So that is why I joined the Internet workshop for Tanzania Journalists organized by MISA-Tan. This workshop I believe will help me improve my skills more on how to use internet in finding information, international news and other important materials that I can read and use when I write a story or feature.

During my first day in the workshop I learned a lot of things that I didn’t know before. Things like buying train or airline ticket or shopping through internet because all I did know was that people can advertise by using internet.

But also I learned how to use major searching engines in the world like Google, yahoo and wikipedia and also how to use other website like www.see.tv, www.ebay.fi, www.youtube.com and many more that I didn’t know that they exist.

From what I have learnt though the first day in the workshop, I know I have ideas on how and where to look for international and local news and even fun things like games.

As a journalist I would also like to learn on how I can use internet to pass my journalistic work to the public, how to reach more people and how to avoid junks mails.

But also as a journalist sometimes we travel up to rural areas looking for stories or features and what we face there is lack of internet services and it becomes very difficult to send a story back to the publisher so, in future I would like to learn on how I can use mobile phone internet or any other internet means to send a story.
Posted by Halima at 11:49 AM 1 comment: